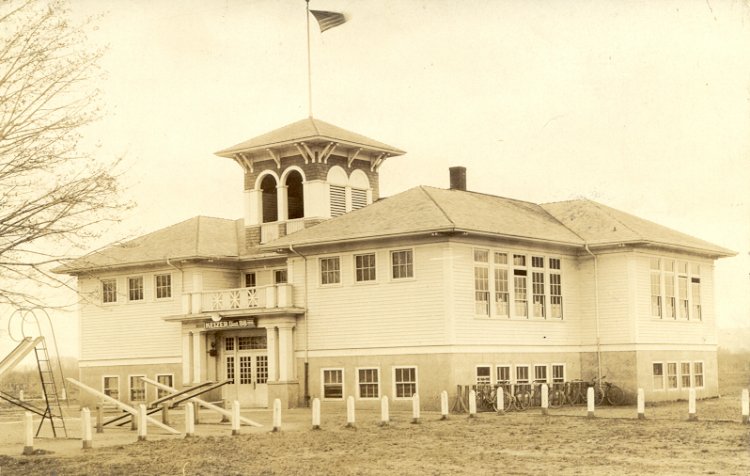 The Keizer Heritage Foundation and museum have worked since 1988 to preserve and showcase the history of the community of Keizer, Oregon.  We are located in the historic 1916 Keizer School building at 980 Chemawa Road NE (next to Keizer City Hall).

In 1916 the “new” Keizer School was built. It was located on the corner of River Road and Chemawa Road (known as “Keizer Corner”). It replaced the 1878 Keizer one-room schoolhouse. The larger school was built with four rooms and a basement. Additions were built over the years. In 1980 the school complex was found to be obsolete and unsafe. In 1985 a committee “Preserve Keizer School” was formed to look into preservation ideas. In 1987 a new Keizer Elementary School opened west of the old site and the old school was closed. The School District sold the property in 1988 to Gaylen Springer who planned a shopping center.

The Keizer Heritage Foundation, Incorporated was formed. It included the Preserve Keizer School group plus Westmoreland Garden Club and Keizer Art Association. Springer agreed to help move “The Old School” to the park behind the center. The cost to move was $15,600. In 1988 Keizer Heritage Foundation started work on restoration of the school. The foundation was poured and in 1989 the move was completed to Fern Park.

In 1996 the building was moved to its current location next to Keizer City Hall.  November 1999 brought the completion of the building, parking lot, and part of the landscaping. The patio benches were in progress as weather permitted. The tenants were moving in and by December 1, all was opened.

More about the Museum:

The Keizur family of Keizer, Oregon – the naming of a community.

Keizer or Keizur – the spelling of our city and the founding family is a common question about our community.
Thomas Dove Keizur and his wife Mary (Guirley) were born on the same day in 1793 in North Carolina. Working their way west the Keizurs traveled to Tennessee then to Arkansas before heading north to Missouri. In mid-November of 1843, after six months on the trail, the 23-member Keizur family (including spouses and a brother-in-law) arrived in what is now the City of Keizer. The family spent their first winter in Oregon on the west bank of the Willamette River. They re-crossed the river in the spring of 1844 and claimed approximately 2725 acres on the east bank of the Willamette River (from River Road west to the river in present day Keizer).

Handwritten on 1852 and 1853 Land grant documents is the spelling of their surname KEIZER, thus began the transition for the community and some of the family members to take on this spelling of their KEIZUR family name. Thomas and Mary’s names were spelled KEIZER for their Donation Certificate No. 36 (Notification No. 177). Each had equal shares of the 640 acres as noted in an 1852 document to “the General Surveyor” and signed TD Keizur and Mary Keizur. Thomas Dove’s son, John Brooks (J.B.) seems to be the first family member to use the Keizer spelling.

The southwest quarter of what is now the city of Keizer was settled by the Keizurs. This is the spelling they used, although various military and land records show the name as Keizer, Kizer, Kisor, Kaiser, or Keiser. Daisy Keizur Barrett and Ginger Powers, who researched their family, found 15 spellings in all.

Thomas Dove Keizur served two terms as a legislator in the Territorial Provisional Government. He was elected to train and lead the first military organization in the Oregon Territory. Captain T.D. Keizur was the first commander of what later became the Oregon National Guard. However, Thomas Keizur saw himself as a farmer and horse breeder. He is, in fact, credited with planting the first apple orchard in the Willamette Valley and bringing the first Morgan horses to the northwest.

Thomas Dove Keizur passed away in 1871 at the age of 78. Mary Keizur preceded him by eighteen years. His legacy of pride, spirit and volunteerism lives on today in the community that bears his name and is the official motto of the City of Keizer.

Keizer was officially incorporated as a city in 1982.

More about the Keizur family:

Thomas D. and Mary (Guirley) Keizur and family emigrated to Oregon via the 1843 Applegate Train.
1843 – Joseph and Mary Louise (Keizur) Hess settled in Yamhill Co., OR

The legacy of our dear Evelyn lives on at the Keizer Heritage Museum. Evelyn attended the old Keizer School (that now houses our museum), Parrish Junior High School, and Salem High School.  Her parents, Roy and Etta Melson, purchased the old John Force land claim farm in 1926 (at Cherry Avenue and River Road) with a big two-story farmhouse. Her father was a skilled businessman and County Commissioner who became a “gentleman farmer.” Evelyn explored the area on foot, roller skates, and while riding her prized Morgan horse, Madame Queen (photo about 1934).  Evelyn would ride her horse all over the Keizer area and to Claggett Creek that bordered the east side of their family’s 34 acre farm in the middle of Keizer. She truly was our homegrown historian!

After marrying her husband, Ewald Franz, they chose to live and raise their children in the quiet community of Keizer as well.  Her parents gave them a portion of their farm to build their house on Cherry Avenue.  Their business, Coomler & Franz grocery/hardware store, was across the street and was operated from 1946-51 at the intersection of River Road and Cherry Avenue. The Franz family later moved to Dietz Avenue, then into the old Melson farmhouse.

After raising her children, Evelyn worked at their store, and other Keizer businesses in the 1950s including: Tele-Treat Drive-In, Capital Drug Store and Orcutt’s Market (Johnson’s Meats). She retired from the Salem-Keizer School District.

Evelyn Melson Franz was instrumental in the preservation of local Keizer history through her participation in founding the Save Our School Committee, which evolved into the Keizer Heritage Foundation. Her work focused on gathering relevant and meaningful memorabilia for the museum. When working on the display “The Old School,” Evelyn found and cataloged items that spoke to the history of the school district. The Evelyn Melson Franz Research Area is a vital part of the museum, named in honor of her diligent work. She and her brother, Lewis, detailed their family history as well as their childhood memories of growing up in Keizer prior to the post-WWII boom. Evelyn had a special interest in researching the first families and their properties that formed the community of Keizer.

Evelyn’s firsthand knowledge of the farm community of Keizer played a critical role in helping to preserve our local history.  She was generous with her time and organizational skills, along with her personal family records that documented key events in the life of Keizer community members. Her dedication and enthusiastic energy will live on as the heart and soul of the Keizer Heritage Museum.

On August 20, 2015, Evelyn and I enjoyed a fun drive in the convertible to the Willamette Heritage Center. We visited the Restaurant exhibit, had lunch at the cafe and then went to the research center on the Mission Mill campus. It was a great day together and such beautiful surroundings. ~Tammy Wild

Videos from that day: (3 videos with Evelyn in playlist) 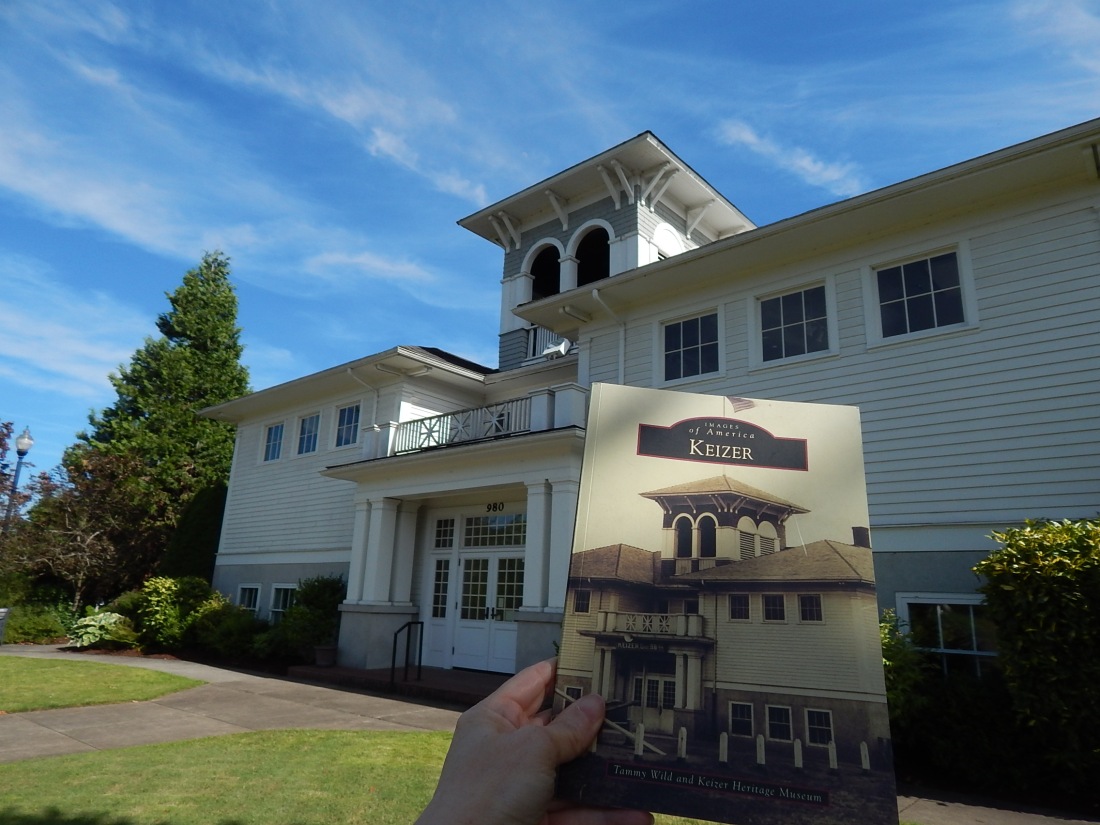 The Keizer Heritage Foundation and museum have worked since 1988 to preserve and showcase the history of the community of Keizer, Oregon.  We are located in the historic 1916 Keizer School building at 980 Chemawa Road NE (next to Keizer City Hall).

Stop by and discover more about Keizer!

Learn about the founding Keizer family, the old Keizer school, farms, businesses and families of our community. Historical items, images and documents are available to review and study.

There is something for all ages to discover!

Books and materials can be viewed or purchased to help learn more about our fair city.

The Keizer Heritage Museum is always looking for volunteers who would like to serve our community as hosts, cleaning and special projects.

Dedicated Historian and Preservationist of Keizer

The community of Keizer is greatly indebted to Ann Lossner who dedicated years to document the area history.  Ann interviewed numerous Keizer “old-timers” and recorded information that had not previously been documented.  She researched many facts as well as her first-hand interviews. Her articles were published in the Keizer News, later Keizertimes, and the Marion County Historical Society (now Willamette Heritage Center).  In 1991 70 of her stories were compiled into a book, Looking Back. Her writings continued and a second book, More Looking Back, was released in 1995.  Ann Lossner’s two books are available at the Keizer Heritage Museum.

Ann and her husband, Chester “Chet” Lossner, moved to Oregon in 1938. The young couple picked crops in Oregon and California. In 1946 their family settled on a 10-acre berry farm in the Four Corners area southeast of Salem where they raised their three children, Peter, Michael, and Susan. The family sold boysenberries and blackberries to a cannery. Ann worked for Montgomery Ward and for the State of Oregon Land Board where she work on the development of parks.

In 1963 the Lossners moved to Keizer. While doing research for the Land Board, Ann noted that little had been written about the history of Keizer. She decided that when she retired, she would research Keizer history and write about it.

For her efforts to document Keizer history and restore the old school, Ann received the Historic Preservation Award and Medal from the Oregon State Society of the Daughters of the American Revolution. That 2005 honor was endorsed by several historical organizations, including the Marion County Historical Society which described her as a “vital historian” and her work as scholarly, skillful, well-crafted and enlightening.

Al Rasmus, past president of the Keizer Heritage Foundation, noted that, “Without Ann’s long and diligent efforts, the knowledge of the history of Keizer would not be what it is today. She talked to a lot of people who aren’t around anymore.”

In 1996, Ann and Chet, both age 82, moved into the Willamette Lutheran Home in Salem. Chet passed away on Sept. 15, 2002. They had been married 64 years. Ann later moved to assisted living facilities in West Linn and Wilsonville, Oregon.

Ann Josephine (Vejlupek) Lossner, was born March 9, 1914, in Cleveland, Ohio, to Czechoslovakian immigrants Joseph and Josephine Vejlupek.  Ann’s sister and brother-in-law, Rose and Stanley Michalek, moved from Ohio to the Salem area in about 1948.

Ann celebrated her 100th birthday with a big party in West Linn.

The community of Keizer continues to honor Ann’s years of devotion and preservation of our city’s history. The Keizer Heritage Museum and Tammy Wild were pleased to include a dedication page in the 2015 Arcadia Publishing book, Images of America: Keizer, as a tribute. “We are indebted to the visionary work of Ann Lossner and her decades of interviews, articles, and books that have preserved Keizer history.”  Ann’s research was essential in preparing for the book and much of her research was including in presenting Keizer’s story.

We were thrilled to be able to present a copy of the book to Ann on March 27, 2015. She passed away on April 18.  A Celebration of Life was held at Willamette Lutheran Retirement Community in Keizer on April 24, 2015.

Along with Ann’s writing and research abilities, she was an accomplished artist and painter. These are photos of two of her paintings that the family included in a keepsake book for her.

It is inspirational that Ann achieved so much success in her retirement years – it’s never too late to pursue your talents and share them with others.

Looking back at Ann Lossner’s legacy in Keizer 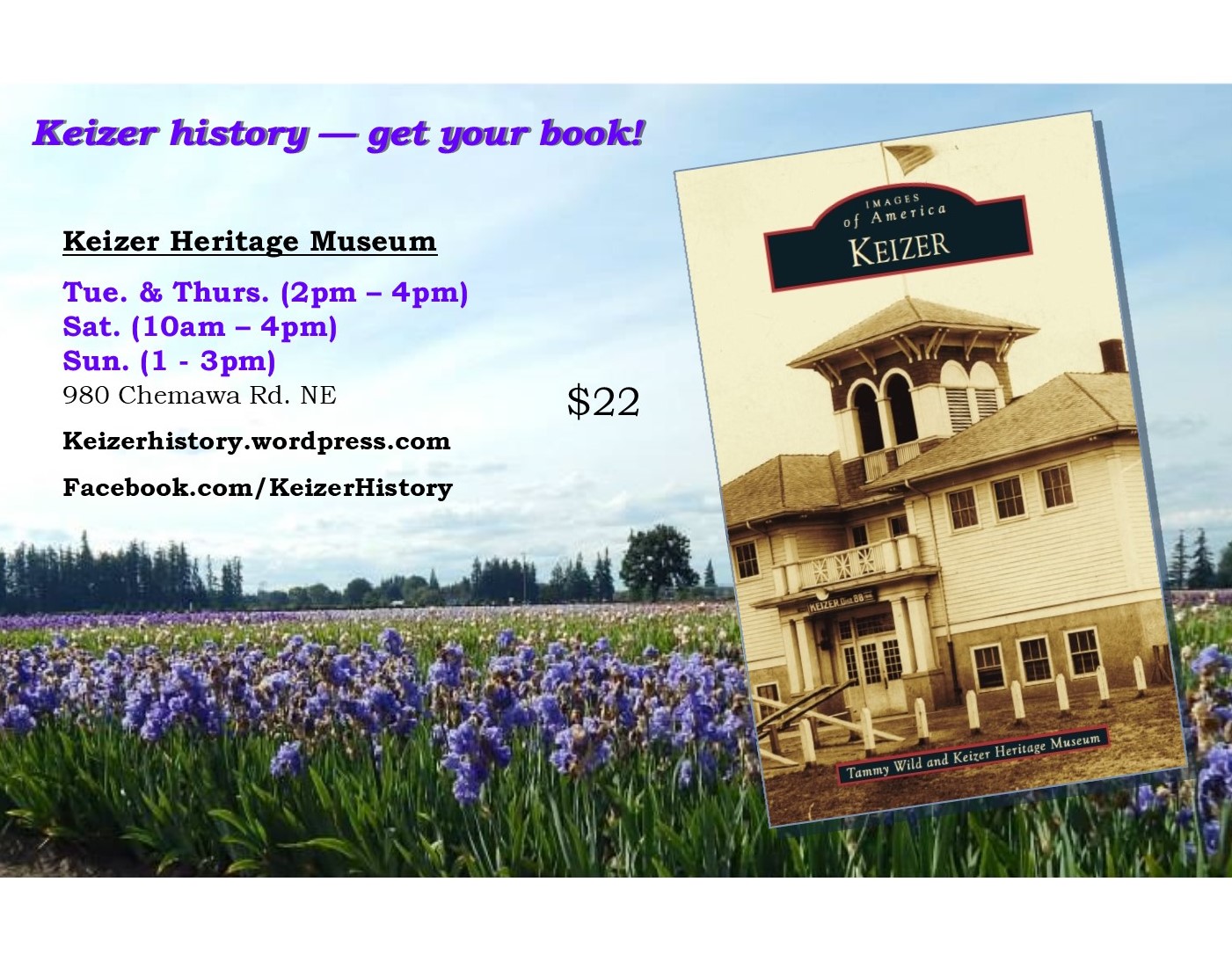 Keizer’s Cultural Center is also a good place to purchase local gifts. Check out the books in the museum and artistic items for sale at the Art Association.